How & When Did Bare Feet Become Taboo?

Thanks to the mask mandates of 2020, the “No Shirt, No Shoes, No Service” signs received an update. Signs have changed. Now, many are saying “No Shoes, No Mask, No Service.”

However, unlike the mask having county, city, or state mandates, there have been no such laws or mandates against going barefoot. Not for driving a car, for going into a store, or for eating in public while barefoot.

How did the public start believing there were laws against going barefoot? How can places still get away with telling people laws exist when there are no laws?

Previous to 1964, it was commonplace for businesses to have these types of signs outside their establishments.

Back in 1964, The Civil Rights Movement Was Passed.

This meant stores were no longer allowed to ban customers over skin color, race, or ethnicity. Also, it was illegal to discriminate against gays, age, gender, or religious beliefs.

Business owners were extremely upset they could not discriminate or choose their customers. Some businesses even closed their businesses down, rather than to serve customers whom they were allowed to turn away previously.

There was also a second factor.

The conflict in Vietnam was just starting. “Hippies” were the youth which protested against fighting in the Vietnam War. These youths did not see a point to the Vietnam battle, and refused to take part in a war they did not believe in.

Business owners were absolutely disgusted with the under age 30 crowd. The youth was considered “anti-American” for not being patriotic enough to be willing to die for their country.

Later on in the 1960s, business owners found they could still discriminate against people. However, instead of for race, gender, or age, they could discriminate through clothing.

Business owners found one thing in common between minorities, poorer communities, and the under 30 youths.

When the weather was warm, they never wore shoes.

It was commonplace for people to spend their entire summers barefoot. Shoes were for winter, work, and maybe to attend church service. For grocery stores, ice cream shops, or walking around town. Rural & suburban Americans found going barefoot to be quite normal.

That changed in the late 1960s. Business owners noticed the very customers they did not want in the store, all primarily went barefoot often. They found they could start a rumor stating it was now illegal to go barefoot.

Business owners were shy when it came to sharing their beliefs. They did not want anyone knowing they were discriminating against potential customers. To change the perception, the shopkeepers used terms like “It is against the insurance company”, “It is against the Health Department”, or “It is against the state, city, or county laws.” If a customer was told “I don’t like seeing people barefoot”, the patrons would simply go find another store to go to. It was worded as “law” to take the store management out of the discussion. Everyone would simply comply if they heard it was now against the law. They would not be tempted to go to a different business barefoot if they were going to be told the same thing again.

To make it stick further, the “no shirt” was added. 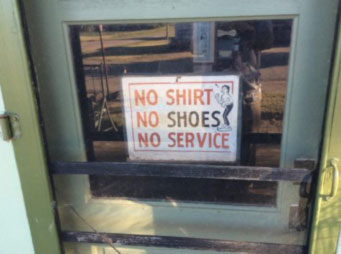 This became a catch-phrase, and easy to remember. It became easy to shame people for not wearing shoes.

Today, most people STILL think this is a law. No laws ever existed. No one back before the internet was able to properly research any legislation on feet and laws. Everyone simply believed it then – and still believe it today.

Flip flops are America’s most worn shoe. They are also the most worn shoe in the world. It is because most people prefer to not wear shoes. However they believe these signs to be laws. People will either spend hundreds of dollars to wear something like these:

Or, perhaps spending as little as $2.00, to wear things like these: 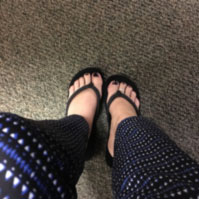 People by nature hate wearing shoes all the time. People would prefer to go barefoot on occasion, but it has been ingrained that there are laws against it. As they think it is illegal to have their foot touch the ground, they will purchase the absolute least amount of shoe so they can be considered “legal.”

If people knew the true origin of these signs, and not believe the previous six decades of racist lies, more people would run errands barefoot. It has been proven that going barefoot is much healthier and safer than wear flip flops, high heels, platform wedges,

and other crazy shoes people wear. Going barefoot has been misjudged and stigmatized due to racist notions. People that choose to do so are hurting no one, committing no crimes, and are normal.

David is the founder/President of the 501c3 non profit, Barefoot Is Legal. He can be heard weeknights 9pm-midnight EST/ 6-9pm PST on The Proof Negative Radio Show (http://www.freedomizerradio.com)