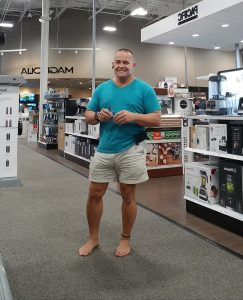 Houston, 2005 – I went into a local Best Buy store to purchase the newest version of some accounting software and was barefoot. As I came through the front door, the manager smiled and greeted me and we exchanged pleasantries.

I proceeded to the software aisle, knelt down where I begin reading various versions of the software I was seeking out. I was trying to determine which version to purchase, when a voice to my right distracted me. I look up to see a Harris County Deputy Sheriff looming over me. He stated, “Sir, I’m going to have to ask you to put some shoes on.”

Now, in full disclosure, I am a former police officer and I’m fully aware of the law. In Texas, police officers are allowed to work what we refer to as, “Extra jobs.” It is an off-duty job where you direct traffic, provide security in bank lobbies, stores, etc. For many officers, it is a much-needed necessity in order to pay the bills. The joking comment was, “Crime doesn’t pay, neither does law-enforcement!” But need I digress.🙂

So, knowing I had not broken any laws, and facing the ridiculous request the Deputy was making, I quickly figured he was working an extra-job at Best Buy. I smiled and laughed, then responded, “Yeah right!” The Deputy then emphatically stated, “Sir, I’m serious, you need to either put some shoes on or leave the store.”

At that point I stood up and this is where it gets fun. I responded, “First off, you are working an extra-job and you know better. I’m a former police officer and you know you cannot enforce “House-Rules.” (House-Rules are the private rules or policies of a business establishment, but are not law.) “Furthermore, it is not a house-rule at Best Buy that I must wear shoes in the store. I walked right past the manager when I came in the front door and he saw me barefoot, smiled and said hi, and we exchanged pleasantries. If he(the manager) had had any problem with me being barefoot, which he didn’t, nor should he, I am sure he would have said something.”

The Deputy, at this point, his ego being challenged, continued to stand his ground and once again stated, “Sir, I’m going to ask you one more time, you need to either put on shoes or leave the store.”

Just to prove his ignorance, I stated, “Oh really, okay, let’s just get the store manager and see what he has to say.” The Deputy responded, “I don’t need a store manager. I told you, you need to put on shoes or leave the store and that’s what you’re going to do.” I responded, “Well, we’ll just see about that.”

By now, the Deputy’s ego beginning to spiral out of control, mumbled, “Yeah, you’re about to go to jail. I responded oh really, I want a supervisor out here right now. I want to speak to your Sergeant or Lieutenant. The deputy said, I’m going to call the DA and then you’re going to jail. (Many times, officers will contact the District Attorney’s office and speak with an assistant DA to determine what charges need to be filed or if an arrest can even be made) I responded, “Go ahead and call the DA’s office and demonstrate your ignorance further, that’s fine with me.”

While the deputy was fumbling with his cell phone, I asked the manager for a piece of paper and a pen which he quickly provided. I looked at the officer’s name badge and badge number and quickly began writing them down. The Deputy boldly stated his name and badge number to me and stated, “Yeah, you get my name and badge number, but you’re about to go to jail.” I responded, “Not tonight, not ever, but I hope it was worth your job! As he had not yet attempted to affect an arrest, I turned and quickly walked out of the store.

Now, let me give you some great advice. There’s an old saying that states, “You can beat the rap, but you can’t beat the ride.”
This simply means, you may ultimately get the charges dismissed, the officer may even lose his job, but it did not prevent him or her from putting you in handcuffs and taking you to jail at that moment, costing you great inconvenience and money. You have to quickly decide, “Do I want to win the battle, or do I want to win the war?”

The next day I reached out to the Chief Deputy with the Harris County Sheriff’s Department. In other US states, they may refer to this position as the Under-sheriff. The Sheriff is the elected official, but it is the Chief Deputy that literally manages the day-to-day operations of the entire sheriff’s department.

I explained to the Chief Deputy in great detail what happened. He quickly and emphatically apologized stating, “Mr. Lowery, I am so sorry that our deputy demonstrated such ignorance of the law and treated you that way. You are 100% correct. I am going to reach out to his patrol Captain, but if you will, in about an hour, call this number (which was to a sub-station) and ask for Captain (blah-blah).

I waited an hour and then called the Captain as instructed. The Captain told me that he had in fact spoke with the Chief Deputy and asked me to tell him the story again, in detail. He did ask me if I would put it in writing and email it to his attention. I said, “Absolutely I will get that to you today.”

Here comes my moment of VICTORY!!!!
Three days later, I received a call from the Chief Deputy and he stated, “Mr. Lowery, on behalf of the Harris County Sheriff’s Department, I just want to apologize for the behavior of our Deputy. The Captain will be reaching out to you later today, but I wanted to speak with you myself on this matter.

The Chief Deputy then went on to state, “After investigating your allegations, the deputy confirmed the conversation that had taken place with you at Best Buy. As a result, the Deputy has been suspended for 3 days without pay. He was also suspended from working extra-jobs for 3 months. In addition, he has received a letter of reprimand in his file and has been ordered to attend a Penal Code update course.

Later that afternoon, I received the call from the Captain who reiterated the same consequences the deputy had received and offered a sincere apology.

To magnify the significance of these consequences, you have to realize that being suspended from work probably cost him at least $500-$600. Being suspended from working extra-jobs for three months probably cost that Deputy at least $3,000 or more of income. Having a letter in his file could potentially prevent him from being promoted in the future. Both serious consequences, but, nevertheless I tried to warn him. Having to attend a Texas Penal Code update course that required him to sit in class for 2-3 days of lecture and usually some form of test.

I will also state, prior to reaching out to the Harris County Sheriff’s Department, I reached out to the Best Buy corporate office in Ohio.

Although the customer service rep laughed when I shared the story, he did confirm that Best Buy does not have a corporate policy that prevents bare feet in their stores.

He stated, “It may be a bit weird to some, but Best Buy does not have a corporate policy forbidding people from going barefoot in their stores.” He then offered me a $200 gift card for my inconvenience. I politely declined and told him I just wanted their corporate office to be made aware of the incident and to instruct other store managers that if they encounter someone who is barefoot, be sure to mind their own business and tell their off-duty officers working Security to do the same.
He laughed and said, “I will pass it on!”

The takeaway from this story is simple:

Boldly and courageously stand your ground when you know you have not broken any laws. Please be sure you know the law and don’t be ignorant to it!

While it is true, simply being barefoot in a public place is not a violation of criminal law (Referred to as the penal code in most US states), if the police show up, remember what the song says, “You got to know when to hold ’em, when to fold ’em, know when to walk away, know when to run! LOL!!! It’s okay to lose a battle, just make sure you win the war!

Back down and back out, Then reach out to the appropriate people in authority. I have been barefoot in Best Buy dozens of times since then and they appreciate taking my money!😉