That informality has permeated the office environment as well, with startups in Silicon Valley garnering a reputation for embracing out-of-the-norm office perks to compete for the best and brightest of the region’s stock of tech talent. They’ve famously included free lunches, in-house nap rooms, free fitness classes and massages, and dog-friendly offices.

But now some of those perks have come to include strutting around the office in house slippers or socks, or for some, bare feet.

Why? A simple reason: The CEOs grew up in households with no-shoe policies.

The offices of Gusto and Notion, both enterprise software startups, are a far cry from the American offices of old, where strict dress codes were enforced and meandering through the office in jeans, let alone barefoot, could have sent you packing. 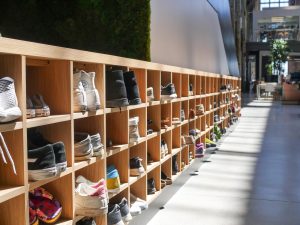 But if shoeless workspaces are going to become a reality, it might as well be in tech country. After all, Silicon Valley was the epicenter of the business-casual dress movement in the 1990s. Since then, as Business Insider’s Aine Cain writes, much of the corporate world — outside of finance and law — has taken on a results-oriented mindset. Employers don’t care what you look like when you’re working, as long as you’re producing results.

And more than that, it’s become a way for employers to lure freshly graduated tech workers — they’re more likely to join you if they don’t have to shed their hoodie for a suit jacket or swap their couch for a stiff desk chair.

As for the barefooted-ness, is it a health code violation? Turns out it’s not, according to the San Francisco Department of Public Health.

“We are not aware of any health code violations in San Francisco for workers to be barefoot in a commercial space,” a spokesperson told Business Insider in an email.

So march on, shoeless techies. March on.